All Saints Day - Todos los Santos in Spanish or Tots Sants in Catalan, is a fiesta in Soller as well as all over Spain.

The Feast of All Saints Day in Spain takes place on November 1st.

This is significant National Public Holiday. The tradition is for people to return to their City, Town or Village to pay their respects to the people in their families who have ‘gone before’. Families take this commemoration very seriously and adorn the gravesides with elaborate flower arrangements, candles and photographs.

Saints Days have a special place in the Spanish persona as it is the Spaniards second birthday each year when he/she celebrates their own saints day. The naming of a child is often done with a Saint in mind and gives even more significance to the place the Saints play in Spanish life. Flowers for All Saints Day 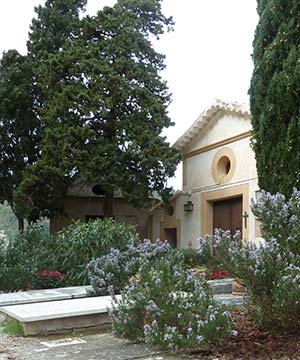 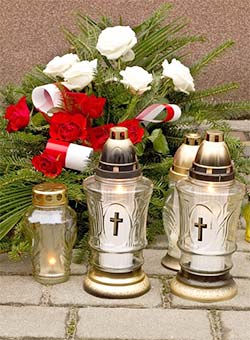 On November 1st most local cemeteries will hold a collective mass for all the souls who have died. This is attended by hundreds of people and is one of the religious observances that has not gone out of fashion. Roads around cemeteries are re routed with police on hand to direct the many people who arrive in the cemetery.

There are special delicacies associated with All Saints Day - ‘buñuelos de viento’ in particular are fried in hot fat outside baker’s shops and sprinkled with sugar and cinnamon. This is supposed to represent a puff of wind carrying the soul to heaven. Then there are the huesos de Santo – the saint’s bones - made of marzipan, eggs and sugar. These speciality foods are a reminder of the days when foods like these were left at the graveside so that the departed were still included in family feasting for special occasions..

In Soller the cemetery high above the City receives thousands of flowers and hundreds of visitors on the days around 1st November. A mass for the dead is said on the date and the graveyard resembles the market with many meeting family members for the only time in the year. A special Cemetery route is agreed for traffic and police are on hand to look after the crowds and direct them appropriately. Tubs of Michealmas Daisy plants are often used as the flowers left at the graveside alongside huge, expensive arrangements. After the meetings at the cemeteries of the area it is traditional for families to have lunch together in one of the local restaurants. This is often the last day of the season for some restaurants and marks the end of the tourist year until next year begins.